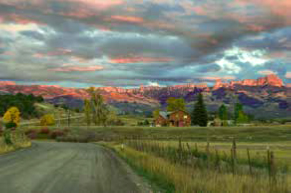 Earlier Photo: This really shows that returning to the same location year after year produces new and exciting pictures and makes you more productive.

Both planning and luck come into play with landscape photos. This picture was one year in planning and shot outside of Ridgway, Colorado.

The previous year at the same exact time, I shot this at a different angle and won a ribbon at the club. (Photo at right)

One year later, I was not expecting the moon to be rising at the exact time of the sunset light on the distant Cimarron Mountains.

Getting the moon like this in camera without using a composite only occurs at rare times, thus, the luck in the picture. But I knew the strange maroon light on the mountains would be the same if shot at the same time of the year and at sunset.